Music careers magazine, ALT-MU are proud to introduce one half of the band Missing Citizen. Having recently been signed, Missing Citizen are set for UK domination in 2013 with their debut album from Coffee Jingle Records. We had a chat with a very busy Daniel Bateman (vocals) and Andy Glazebrook (Guitarist)… 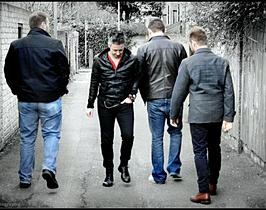 Who are Missing Citizen?

Daniel: Missing Citizen are just four guys that walked away from the wreckage of other bands. We all shared a common purpose and value in music, got together and created a sound that we all liked. It’s a sound that we’ve built on and developed and have continued to like to this day.

The band had a break a while ago. Do you think this was something needed to continue the passion?

Andy: The passion has always been there, it has just been a little misguided in the past. I think when we got back

together we were all a little older and wiser and had a clearer idea of what we wanted to get out of being in a band. Like most bands first time round, we were seduced by the idea of being a famousrock band and the possibility of earning a living from making music! This time round we are more
realistic.

You’ve been together for quite a while but you’ve only just been signed, was this the first offer or have you waited to find the right label?

Andy: There is always a feeling as a band that someone will be out to exploit you so we have always been very cautious when people start offering to help you out of the blue. In the past we have avoided people offering to produce songs for us and joining management groups, but when Martin Wake from Coffee Jingle Records contacted us and talked to us about his plans it seemed like a great thing to be involved in.

Please click the image below to read the full interview…​

A digital music magazine for musicians and music lovers with alternative ideas and careers.

At last we are here with another issue for you to feast your...

Issue 6 OUT NOW! Welcome to the long anticipated silly issue of ALT-MU!...

As if ‘the man’ hadn’t messed us around enough. Now he’s slapping our...