ALT-MU Magazine were very excited to interview the sensational duo Bitter Ruin in Issue 1 of our music careers magazine. Amazing vocals, first rate musicianship and the support of their co-manager Matt Lucas means that these two are tipped for the top. We caught up with Ben Richards and Georgia Train to find out what makes them tick… 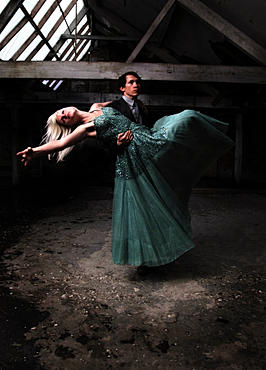 You describe yourselves as ‘Contemporary Expressionism.’ Could you please explain to us what you mean by this?

Ben: People find our music hard to pigeon hole as its sound and influences can change dramatically from one song to the next. After a lot of failed attempts by our fans and music critics to do so, we decided to do it ourselves and settled on Contemporary Expressionism. On first reflection the term seems a bit detached from the musical world but the more you think about it, the more it works. We write what we want to hear, play how we want to play, and express what we feel and there is no need for any restrictions. We use the term ‘contemporary,’ to distinguish between our ‘modern expressionism,’ and ‘expressionism,’ in classical sense.

Expressionism is often used as a term used in the visual arts. When writing your material are you inspired by the visual as well as the emotional?

Ben: Our live shows are definitely inspired by, and developed with a strong visual aesthetic. When people go to see a show they expect to SEE a show, not just listen to some music and stare at a wall! I think a lot of bands neglect this aspect of their live performances and in actual fact it probably isn’t something that comes naturally to a lot of musicians – after all, we are musicians and not actors or dancers for a reason! However, all it takes is a bit of thought, some research, or even some outside assistance from a professional to really liven up a stage show – Georgia is great at this as she has had training in the performing arts, I just do as I’m told!

Your songs and performances often have a storytelling feel to them, are your lyrics taken from real life experiences?

Ben: Yes. Everything we write about is inspired by life – whether that is our life, a close friend’s or somebody on the news, well that changes from song to song.

You both met at Music school. Were you both instantly drawn to each other?

Ben: There was an instant click as soon as we started playing together. We both are extremely ‘in tune’ with each other, which helps create our tight vocal harmonies.

You released your debut EP 6 months after your first gig together – that sure is quick! What were the benefits to releasing your music at that pace?

Ben: It was very quick! I think we did this for two reasons: firstly, without a physical product for new fans to leave a show with you can’t solidify your relationship and holding on to your fans is especially important when first starting out. Secondly, we needed the money to keep gigging.

Please the image below to read the full interview…

A digital music magazine for musicians and music lovers with alternative ideas and careers.

At last we are here with another issue for you to feast your...

Issue 6 OUT NOW! Welcome to the long anticipated silly issue of ALT-MU!...

Why Stranger Things is dominating Halloween 2016

If you haven’t seen the eight-part, sci-fi series ‘Stranger Things’ then I suppose...

Bring Me Sunshine released on August 24th‘ It is potentially a dream come...